I heard about Gunnar Glasses (Gunnar Optiks computer glasses) about two years ago.

After staring at the computer all day, I would go to bed with tired, burning eyes and it seemed my mind would never shut down.

That’s when I decided it was worth a try (even though my wife thought I was crazy!).

This review is the result.

Wondering if Gunnar Glasses works? See the reviews of the popular Gunnar Optiks computer glasses from a real user. 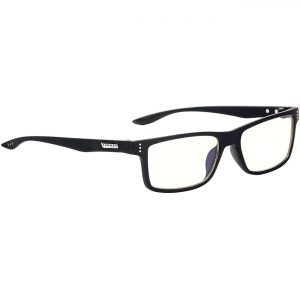 So the big question is – Did they work?  Our Review

Yes!  After wearing these for about two – three days, I began noticing a huge difference.

While it was a big adjustment for wearing glasses because I’ve never worn glasses, the fact was I no longer had tired, burned out eyes.

I would use them all day as long as I was in front of the monitor.  I know some people continue to wear them while watching television.

I never did – just for the computer and like I said, I noticed a big difference.

Which brings me to this review.

Do I Recommend? YES!

What do Gunnar Glasses Do?

The promise is to help with your eyes.  As I said, I felt my eyes were fried along with my brain every night before bed after spending even just a few hours on the computer.

Gunnars block the blue light that’s put out by computers and electronics (tv’s and gaming devices as well).

After just a few days, I was shocked at how well these computer glasses worked.

As for other brands, I cannot speak for because I’ve only tested Gunnar Optiks.

The Damaging Effects of Blue light

Blue light is what is put off from smart phones, computers, tablets and televisions.

Long term exposure can have a negative impact on not just your eyes but overall health.

Studies have shown that link exposure to this blue light to eye strain, tiredness, mental fatigue, along with hindering your sleep.

Which can lead to a long term side effects if goes unnoticed.

According to the Vision Council, 70% of adults in the United States have reported eyestrain as a result of using digital devices.

Along with those numbers, 80% have confessed to using a digital device that puts out harmful blue light the hour before bed with kids increasing their exposure to digital devices.

That’s where this product comes into play and why I highly recommend.

See, I noticed a huge improvement in my eyestrain along with the ability to get plenty of rest.

Gunnars have a patented technology that blocks out 65% of the harmful UV rays that help eliminate headaches, eyestrain from blue light.

I bought the Gunnar Glasses with no real expectation. I was pleasantly surprised at the impact it had on my eyes at the end of the day.

There are several styles from Gunnar Optiks and I’ve outlined our top rated glasses below.

You’ll find they are stylish and they have a great level of comfort.

Here’s Our Top Rated Gunnar Glasses at the Best Prices

In a nutshell, we were never designed as humans to be exposed to televisions, computers or smart phones especially all day as most people walk around with the phone in their hands.

People are Addicted to the Scroll

It’s no longer that people are just being exposed to this harmful rays for work, it’s also from leisure activities and hobbies.

So, the bottom line is we have become a nation addicted these devices.

With that being said, the best action is to understand it and protect yourself along with your children by teaching them responsible habits and that begins by protecting your eyes with a quality blue light blocking technology like what Gunnar Optiks have done with their superior eye wear.

ThriveCart Review - Is It the Best Shopping Cart?

Related Articles
We will be happy to hear your thoughts

WebinarJam Free Trial, Review, and Pricing From a REAL Member

Convertbox Review – Does It Really Work?